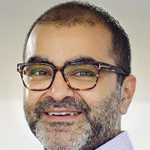 The Essar Group, established in 1969 by Shashi and Ravi Ruia, is today counted among the top five industrial houses in the country. Essar, through its CSR initiative Avid Learning, has built a platform to promote the arts and culture in India. Originally conceived as an education platform in 2009, Avid Learning is now known as one of the key stewards in the arts and culture space.

As India was emerging as a global economic player, you simultaneously saw an increase in global interest in the arts and culture of India. In 2010, after having spent 17 years in New York City and Boston, I moved back to Mumbai. I noticed Mumbai had a vibrant arts and culture scene with its numerous galleries, performance spaces, artists, practitioners, and scholars scattered throughout the city, but I didn’t see the same richness in public programming and educational discussions, like I used to attend in New York. I wanted to fill this gap in the art world ecosystem.  When I took over as CEO, Avid Learning, in 2011, it was with this vision in mind that I strategically built the organisation into what it is now.

It’s probably because of my ‘Mad Men’ advertising and marketing background that I view what we do at Essar as beyond CSR; it is cultural philanthropy.  We are leveraging arts and culture in a way that builds goodwill, creates cultural value and benefits the brand for the Essar group. I am surprised that you are not seeing more corporates across India approaching arts and culture in a similar fashion and investing regularly in public programmes.

Arts and culture can impact the overall image and brand of a company. Since its inception in 2009, Avid Learning has conducted over 750 programmes and connected with more than 85,000 individuals, who are students, homemakers, corporates and creative enthusiasts. Driven by its motto, ‘Learning Never Stops’, Avid’s various formats ranging from workshops, panel discussions, gallery walkthroughs, and festival platforms, create a dynamic and interactive atmosphere that stimulates intellectual and creative growth. As Avid Learning gained visibility, people’s perceptions of Essar became more positive; it has helped Essar to be seen as a leading innovator, connector, and a corporate that seeks to positively impact communities. As a corporate, one has to find and build a competitive niche and build a sub-brand in this context which ends up creating equity for the corporate.

Two key values of our organisation are inclusion and partnership. We have sought to work with a range of artists, practitioners, organisations, patrons, art enthusiasts, and make sure everyone is welcome to attend our events. We have sought to form alliances with a range of platforms, too. We have collaborated with the Kala Ghoda Arts Festival in Mumbai, Jaipur Literature Festival, and the Serendipity Arts Festival in Goa, among many others. Last year, we created a partnership with the Royal Family of Gondal, owners of the restored Royal Opera House of Mumbai. It was a unique opportunity to curate programming for the Royal Opera House, and to offer a range of performance arts and culture to the public.

From a CSR perspective, arts and culture in India, like elsewhere around the world, is a lower priority. It’s typically seen as not essential compared to other pressing development issues. The major issues in the arts and culture space in India continue to be lack of education & training, funding & financial support and the structure or positioning.

Biographer Walter Isaacson recently wrote about the unique characteristic some of the world’s greatest minds share – the ability to think both like an artist and scientist citing Steve Jobs, Leonardo da Vinci, Benjamin Franklin and Albert Einstein as examples. Since I now have a daughter who is school age, I am paying more attention to the education sector in a personal capacity. From primary to post-graduate level, there is little focus on arts education in India compared to other countries. You have seen schools focus more on English, Math, and Science, while Arts take a back seat. I hope that it becomes a subject taught in all schools to inculcate an appreciation for the arts. Because of this, children do not realise that could be a viable career option in the arts sector. The arts help to inculcate critical thinking and creativity, and creativity leads to innovation. At more advanced levels, it would be great to see increased investments by the government into art schools in India – so that students who want to go into more specialised fields can gain that training in India. There are few, if any, arts management courses offered in India. In order for India’s arts sector, and the business, science and technology sectors to grow, educational investments need to be made.

Funding for the arts is a universal problem. In India, like in other countries, royal families were typically the patrons of charities and the arts. Although the CSR law includes as activities, ‘Protection of national heritage, art & culture including restoration of buildings & sites of historical importance & works of art; setting up public libraries; promotion & development of traditional arts & handicrafts,’ it is a narrow definition, and most corporates shy away from supporting the sector even though they have the financial resources. There also isn’t any national CSR campaign related to arts and culture like how you see with the Swachh Bharat and Clean Ganga initiatives.

Cultural experiences are not viewed as tangible and it’s hard to see a return on investment; for example, we have not seen recognition of the sector as contributing to the economic growth of India. When analysing the arts and culture sector, it needs to be examined in a holistic manner.

Traditionally seen as America’s cultural capital, New York City recognises that its creative sector is one of its strongest economic assets – with the number of people it employs and its unique ability to attract tourists. In 2017, the city government explicitly stated that these cultural and entertainment assets define the New York City brand and made further investments in those industries. In Mumbai, there is untapped potential in this regard. When artists perform and people attend art programmes, they often eat and drink at nearby cafes and restaurants, stay at nearby hotels, shop in retail stores, and pay for transportation and/ or parking. According to research in the US, based on over 150,000 audience surveys, the typical arts attendee spends about $25 per person per event beyond the cost of admission, and this number is much greater in metropolitan areas. I would imagine this data would be similar in India, but we don’t have any research in this regard. It would be beneficial to gather this type of information to use to advocate for investment in the arts from various stakeholders – government, businesses, and philanthropists.

Addressing these misperceptions will help to change the narrative and underscore the importance of investing in the arts in a long-term strategic manner. This is where corporate engagement with the arts and culture can, and has already been to some degree, a game changer in this area.

For India, the world’s largest democracy, the arts represent freedom and are an expression of a vibrant civil society. India has one of the oldest, richest, traditions in arts and culture; simultaneously, it has a vibrant contemporary art scene. The arts uniquely reflect the human experience and our aspirations. The arts have the power to build bridges, bringing people together and sparking conversation. It can be used as a tool for foreign policy and business. Arts and culture is the intersection of creativity, imagination, and innovation. Government and corporate leaders, along with private donors, should understand the importance of investing in the cultural and creative industries and its untapped potential to shape India’s future.