Feature
To B or not to B
Advertisement 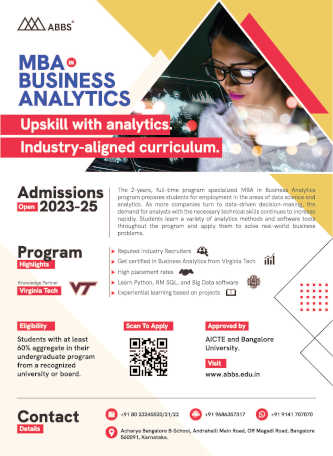 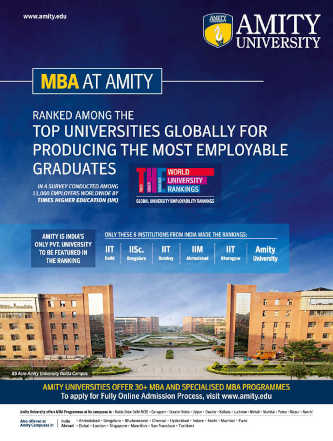 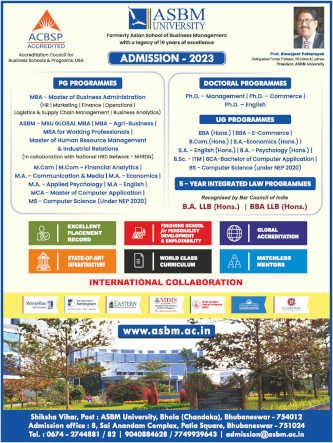 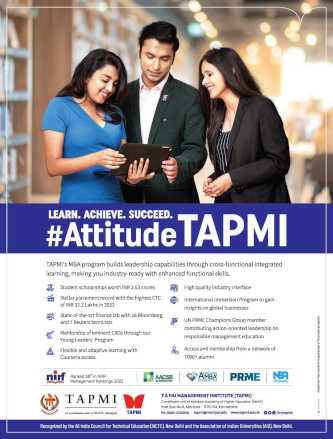 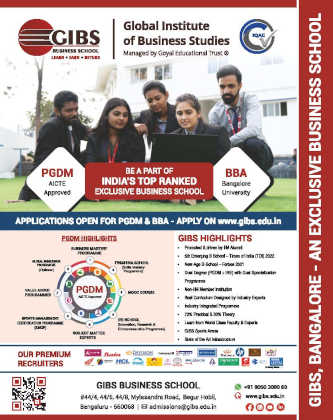 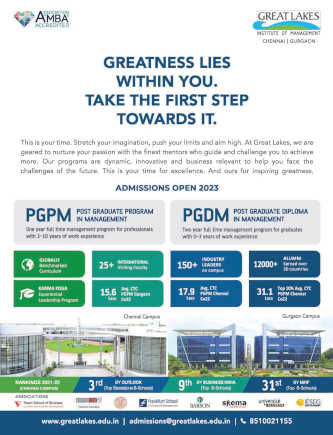 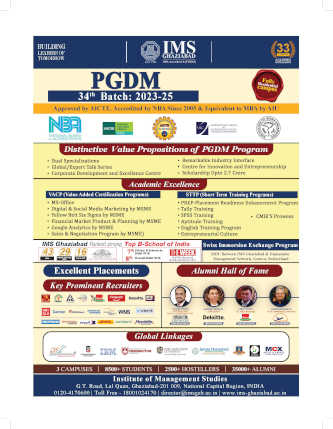 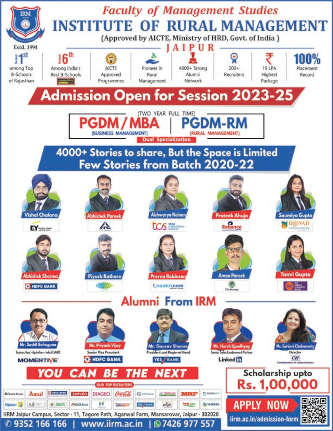 In earlier years, gurudakshina was given by the students after completion of their formal education and stay in the gurukul. This honorarium was sometimes demanded by the guru in the form of a task to be performed by the students. This tradition, like many other traditions, has long been jettisioned in modern times.

Not only are the B-School fees specified upfront, but even the lodge and boarding expenses have to be paid upfront in most cases. In Mahabharata, we are told, Eklavya, was asked to cut off his right thumb by Dronacharya but getting admission to a good B-School requires much more than the equivalent of an arm or a leg and sometimes worse. Eklavya, despite the loss of a thumb, became one of the best archers and went on to be a king, but can a B-School graduate aspire to become a corporate czar?

Like any good businessman (in the works), the B-School aspirants are well advised to do a cost-benefit analysis before embarking on the 12-24 months rigorous education course, sometimes in the same city, sometimes outside the town of their residence. The well-heeled minority of students aspiring to go abroad do not necessarily have to do it, fully ensconced as they are in their comforts, that an MBA tag from the Ivy League schools or even B grade B-Schools in the US or Europe will ensure them a good job. And the dollar earnings will more than compensate their initial investments (say, R30-50 lakh) towards the cost of tuition fees and probably an equal amount for stay overseas. Stanford fees are $65,000 for a 21 months course, Harvard, $65,000 (two years), same as Tuck School. Other schools in the US charge $35,000 per course, with another $10,000 as boarding charges. In the UK, it is about $30,000. The returns over a longer period, say, 2-3 years, will compensate them for the loss of pay during the period of study overseas.

Undoubtedly the benefits of going overseas cannot be undermined. Says Priyanka Deo, who went off to the London School of Economics, after a short stint with Business India in Mumbai. “I made the decision to go regardless of the cost and am glad that I did. My professors not only taught me course content, but also guided me in taking practical steps to pursue a career I aspired to in broadcast journalism.” Deo, who co-produces and anchors two television shows on cable television in Boston says, “It is safe to say that the decision to go to LSE paid off in big dividends!”

But, for the lesser mortals, who are not born with the platinum (silver is passé) spoon, it makes sense to have a clear idea of, not just the cost of fees and boarding fees, but also several other factors adding, directly or indirectly to their costs. In India, NMIMS, a popular college, charges Rs5 lakh (for an executive MBA), Rs17.5 lakh (for an MBA: HR). For PFGM, the course fee is Rs14.5 lakh. Sydenham College of Managment, a government-aided institution in Mumbai, charges Rs1.38 lakh, while, in Welingkar it ranges between Rs3 lakh (for a PGDM) and Rs5.5 lakh (for a two-year course in media & entertainment). There are several other courses, with varying fees structure, too. Jamnalal Bajaj, one of the most aspired MBA institutions after the IIMs charges Rs2.2 lakh.

Most B-Schools expect students to have at least two years’ work experience. Sometimes, executives aspiring to get better recognition and faster promotions, undertake formal management studies. If married, the cost of moving in with one’s wife in a new city, even if it is for a year, has to be considered. The opportunity cost of losing one year’s (or even two) remuneration has also to be taken into account. Few forward-looking companies sponsor students to undertake studies with a promise to take them back, after the completion of course. For others, it would mean a mid-career break, to later join the teeming millions hunting for a new job. There are several institutions and banks offering attractive loans, with a staggered payment period, after completion. The service costs by way of interest and loan account need to be considered. Many a time, an aspirant also takes help of coaching classes to clear entrance tests, the most popular among them being the Common Admission Test (CAT).

Getting a realistic picture on costs is important. The aim of this is not to dissuade students but rather to make a correct appraisal of the cost and benefits before investing his time and efforts in getting the MBA tag. This is even more important, given the fact that B-Schools mushrooming in the country. Tier I comprises less than 4 per cent of the total number of the roughly 3,000 schools and colleges offering MBA.

One has to see the placement record of the schools over the last three years. Averages are quite misleading. More often than not, the top 10 per cent of the institutions get a lion’s share. In several leading institutions, a proper analysis is given. Jamnalal Bajaj Institute of Management in Mumbai provides a good break-up. The highest package is Rs34.30 lakh, the average is Rs18.76 lakh, while the median package is Rs17 lakh per annum. In Sydenham, the average placement is Rs8.75 lakh. The average placement in the University of Rural Management, Anand, Gujarat, is Rs8.2 lakh per annum. Most B-Schools do give a fair idea of the companies coming in for campus recruitment and the compensation offered. Placement is one good indicator of the benefit one can expect.

However, many schools are not able to get 100 per cent students recruited every year. In which case, will the MBA degree score over others? “The weightage for an MBA is completely job- or role-dependent,” points out R. Swaminathan, People’s Officer, wns, a Nasdaq-listed company. “If it is a part of the eligibility criteria, then surely, anyone who has it gets the weightage. MBAs from premier institutions do enjoy a 20-30 per cent higher compensation level.”

A few companies have, however, stopped campus recruitments. Their rationale is that, even after having an MBA degree, the student is still confused. And, instead of investing in training and seeing the applicant change jobs, they prefer to take individuals on merit through placement agencies. In banks, one of the grouses is that, armed with a degree, many MBA students, taken in mid-level officers’ posts, do not want to ‘dirty their hands’; instead, all of them want to opt for planning & strategy. Without being aware of the operations, how they can be taken into the planning division, a senior banker wondered.

The biggest point of difference of a student passing through a B-School is that he is more articulate and has a broad-based thinking. “It opens up one’s mind,” said P. Chidambaram, former finance minister, during one of his meetings, when asked about his experience at Harvard. But other faculties like chartered accountants, company secretaries or financial accountants, which have specialised knowledge, also have an option to learn and broaden their horizon after a period of 3-5 years.

Does the MBA shine rub off after a few years in an organisation? “Initially, an MBA degree from a premier institution does count, however promotions and advancement are strictly based on merits, subsequently,” says Himanshu Kaji, executive director & group COO, Edelweiss Financial Services. “Meritocracy is the sole factor determining future growth of the employee,” concurs Parag Shah, senior VP, corporate finance, Yes Bank. Adds R. Swaminathan: “Simply put, an MBA is a springboard. But the rest of the flight depends on a lot of other factors. It is only passion for work and smart thinking that gets employees within wns to move up the ladder.”

While different companies have different policies, the truth is that several of the top level management cadres have more MBAs than chartered accountants and lawyers – although there are several sporting multi-degrees like ca, MBA or CA, CS, MBA. But the MBAs in the top management are more likely to be from the top 10 or top 20 schools rather than some obscure schools!

The work of the MBA starts before he zeroes in on which gurukul he would like to go to better his career prospects. Getting entry into a company/ies of his choice, comes later. 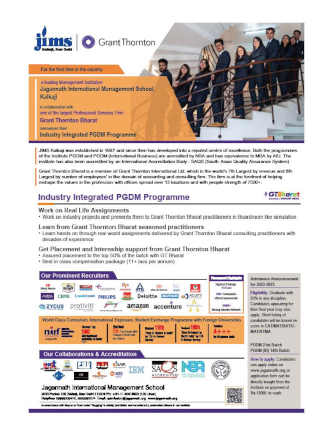 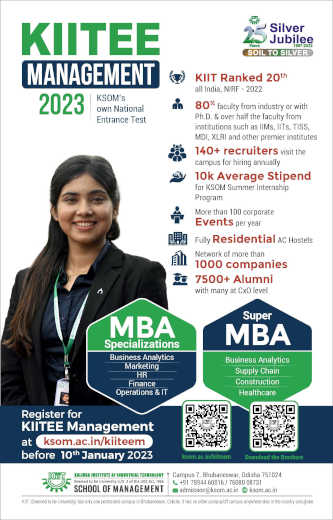 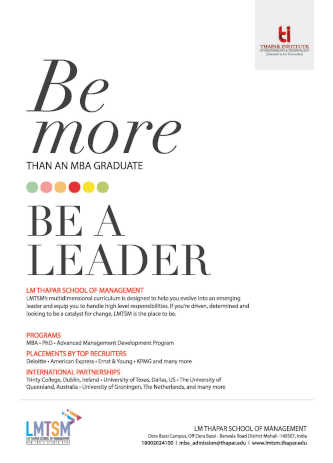 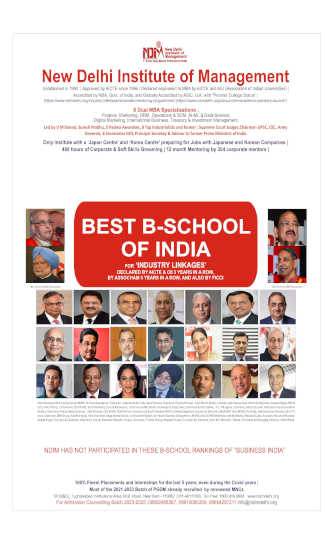 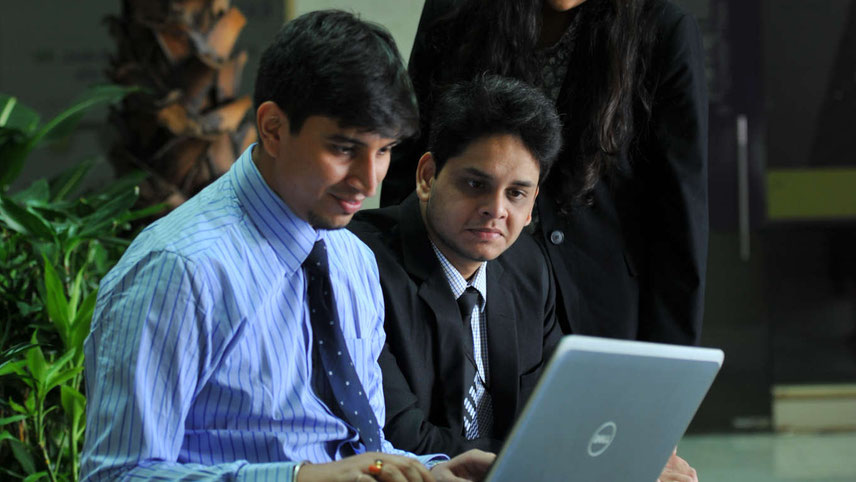 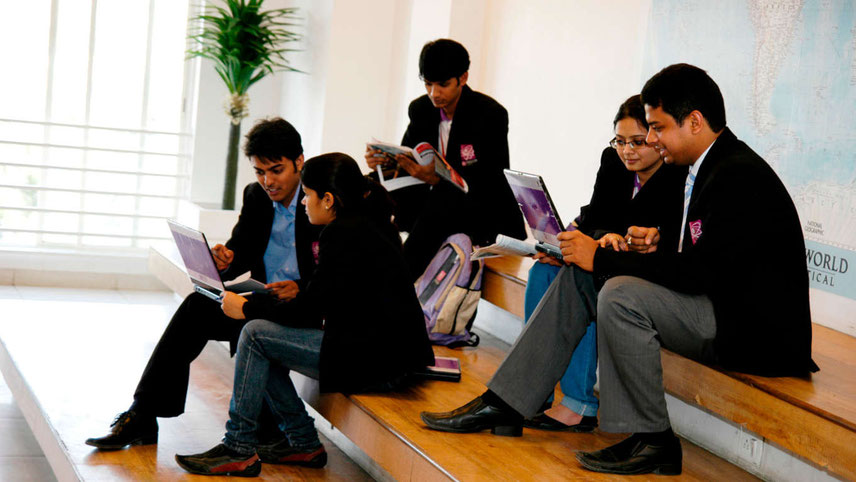 For the structure and functioning of B-Schools in the country, 2020 turns out to be a path-breaking year 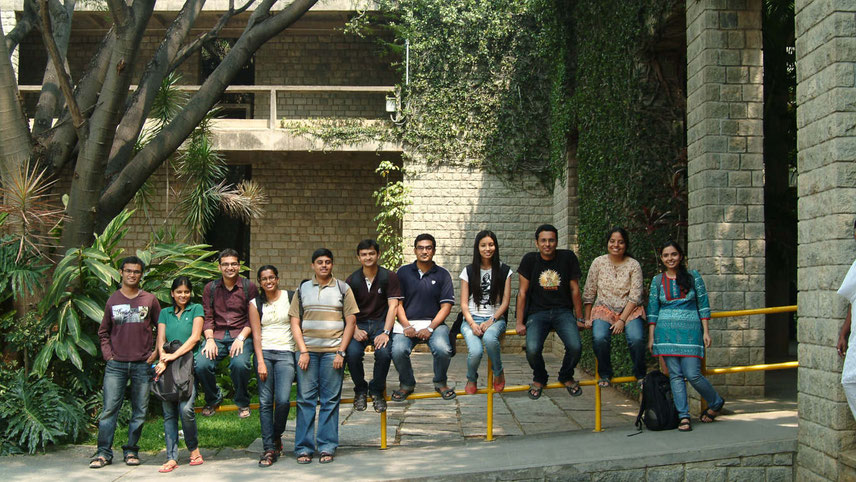 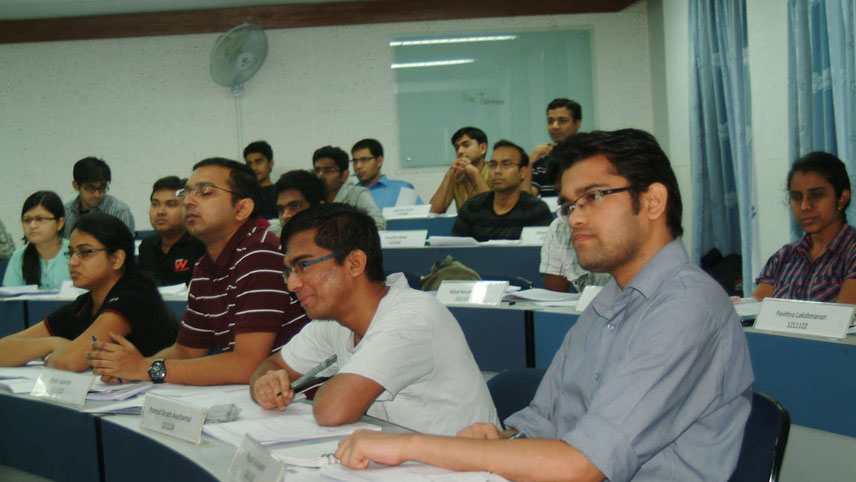 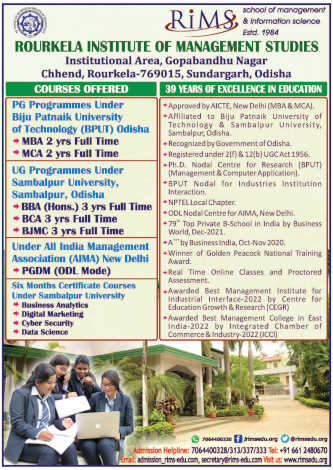 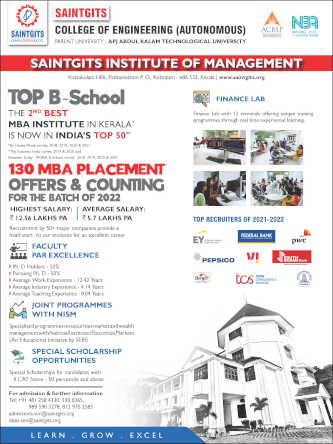 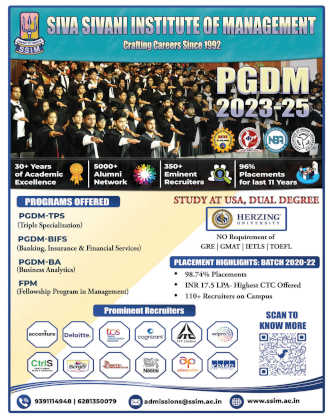 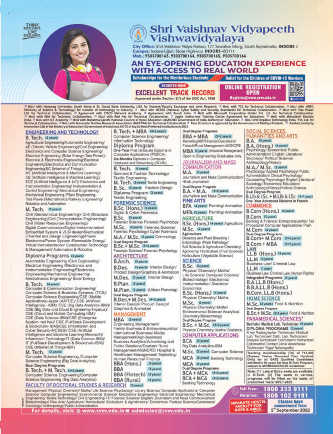 The introduction of black pepper as an inter-crop in the sopari and coconut orchards, has enabled farmers to cultivate crops simultaneously

Brushing up on Oral Health: Colgate-Palmolive India teams up with Andhra Government